Artifact Of the Week

Every week, we post an "Artifact of The Week" on our Facebook. In order to show off our collection to the public. We strive to interact with the community, through a mutual interest in local history. The Lutz Mountain Heritage Museum, takes pride in a collection that focuses on the history of Lutz Mountain and it's environs. We are currently accepting donations if you have an interesting pieces, that would add to and/or reference our collection.

ARTIFACT OF THE WEEK #9 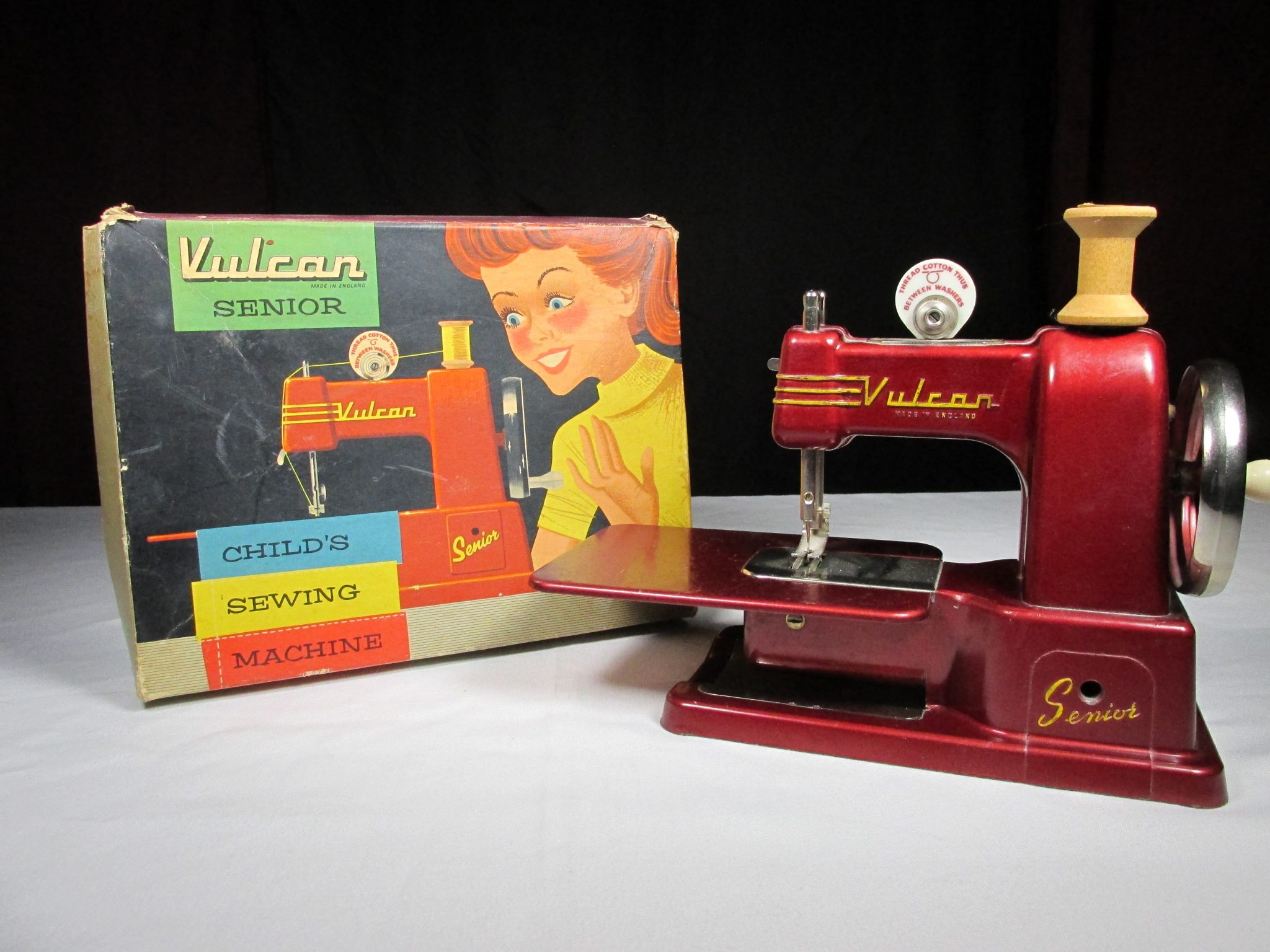 This week, we are featuring a fully functional sewing machine toy from the 1950’s. The Vulcan miniature and toy sewing machines were made by the Sydney S. Bird company under the trade name 'Cyldon'. The company originated in Enfield, Middlesex but around 1953 it relocated to a new factory in Fleets Lane, Poole, Dorset. This model was sold at the T. Eaton’s Co. during the 1950s.
Inspired by the classic Singer 20, the Vulcan range comprised of 3 models. The red 'Minor, the Blue 'Junior' and the Red 'Senior'. The one we have here is a Red Senior. The main body was an alloy die casting with the name cast into the front. The backside of the body was enclosed by a pressed steel panel which clipped in to give the appearance of a solid body. All three models came with a table clamp and had a plastic disc behind the tension unit which is prone to being broken. The 'Senior' had a painted cloth plate which could be detached to turn it into a free-arm machine.
This toy was marketed towards little girls with the intent of teaching them homemaking skills. The company sold products with the by line "for the little lady". The idea was that the child would imitate her mother and make dolls clothing while her mother sewed for the family.

ARTIFACT OF THE WEEK  #9 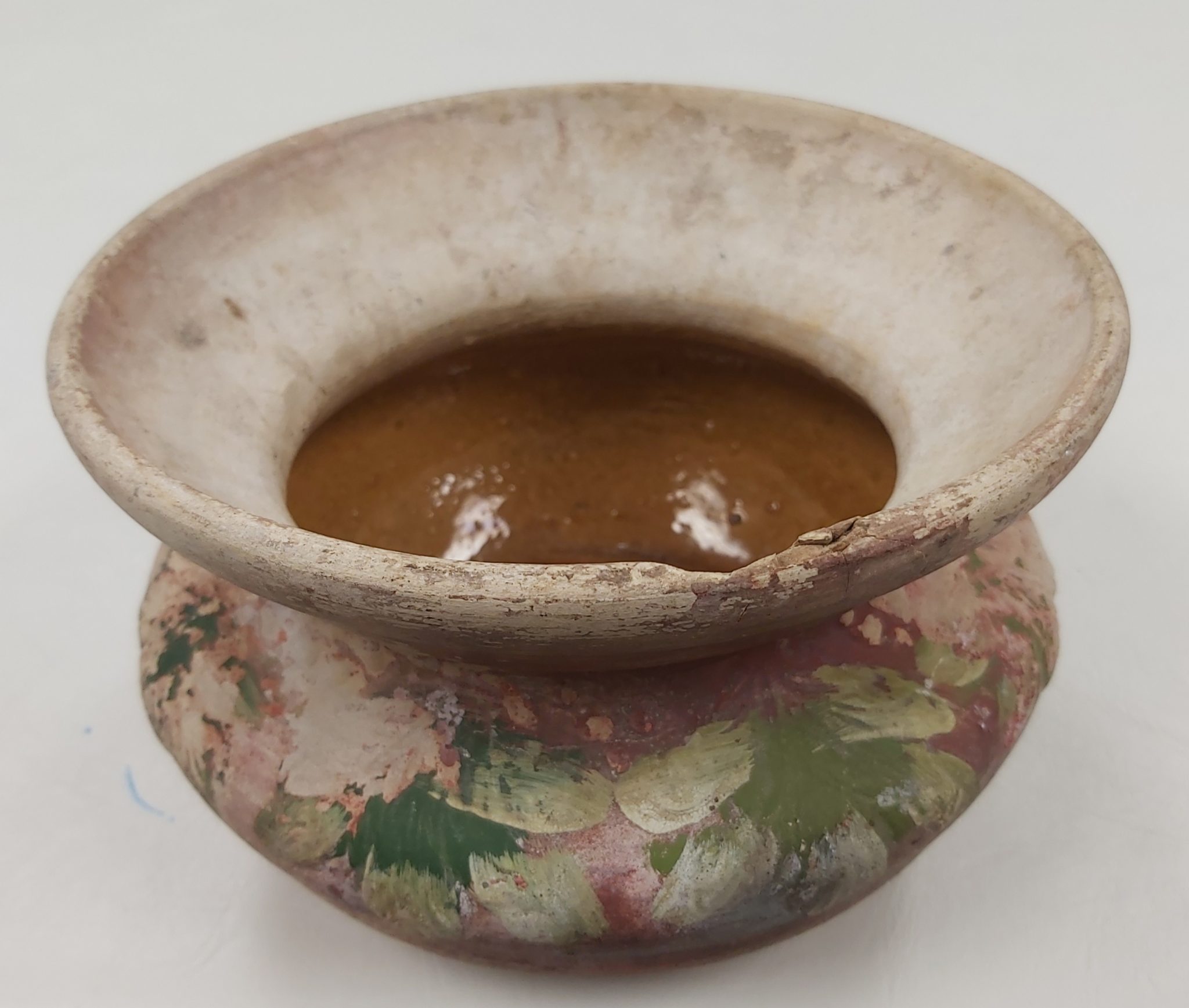 Around the turn of the 20th century, the popularity of chewing tobacco had become so great that laws had to be put in place to control public spitting. Spittoons, receptacles with a wide rim designed to collect the tobacco-stained saliva, were commonplace in restaurants, in pharmacies, in offices, and near the entrances to popular businesses. The habit of spitting in general, whether or not the person chewed tobacco, was still a  public practice. It took the devastating flu pandemic of 1918 and the prevalence of tuberculosis to change public perception regarding spitting in public. Spittoons were generally made of brass and other metals but could also be ceramic or enamel. Even into the 1930s, spittoons were considered a necessity and were found on the floors of barber shops, in banks, and just about anywhere frequented by men. By World War II, the majority of people who used tobacco had switched to cigarettes, which were considered far more sanitary. Thus spittoons became largely unnecessary.

This spittoon was used at the Orange Lodge, a Protestant men's fellowship in the Lutz Mountain/ Ammon community. The Orange Lodge (or Orange Hall) was located on the Ammon Road in Moncton, NB and was on the right hand side of the Gorge Road, above the Gorge United Baptist Church.

ARTIFACT OF THE WEEK #8 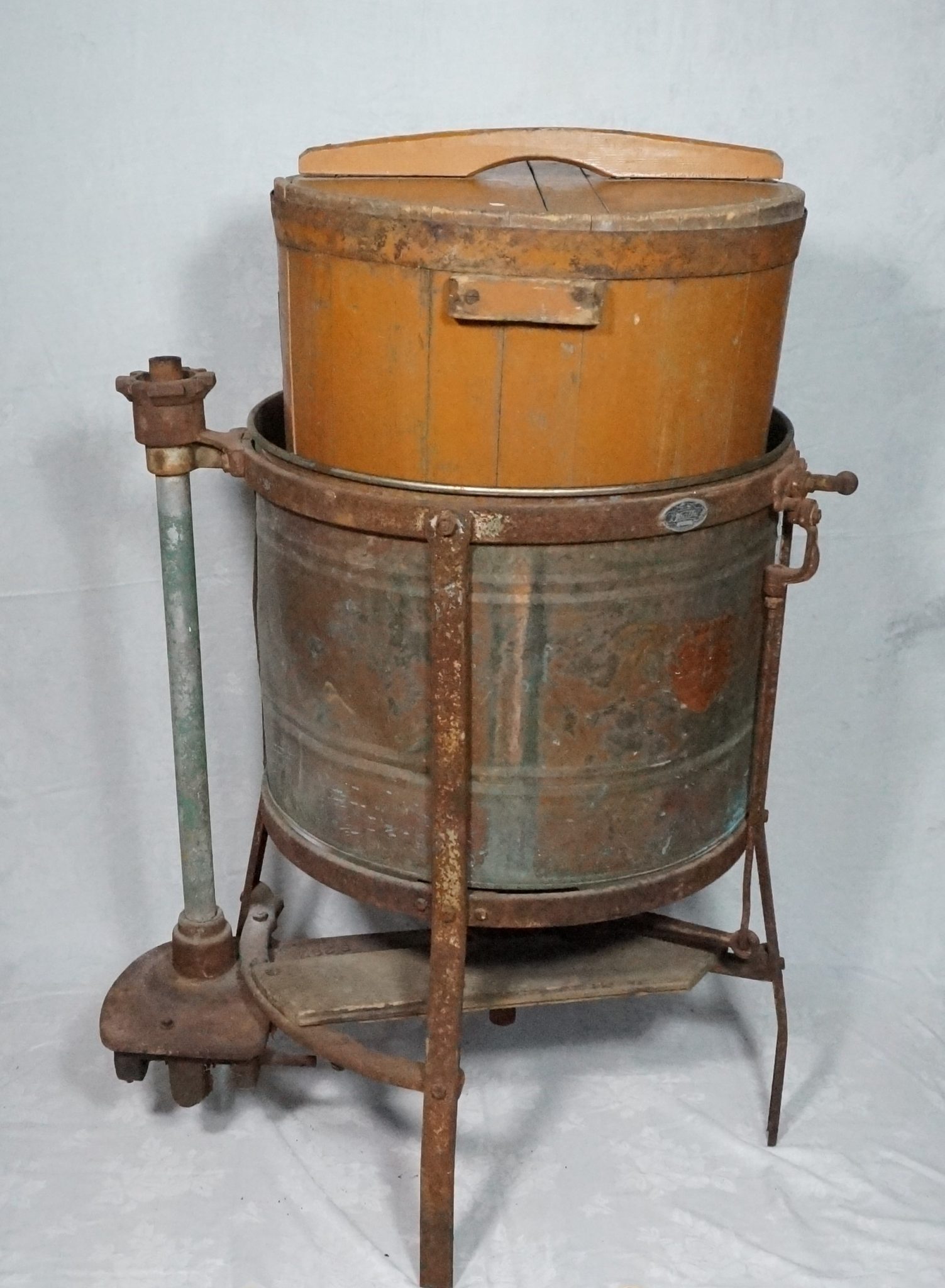 There have always been inventive individuals, striving to innovate the industrial world.  This curiosity comes down to the same thing that makes us human, the people we are today. A species' job is to survive, that’s what is written in our genetic code, a need for survival. Innovation may have started with using sharp rocks to open bones to consume the nutrition dense bone marrow, yet, that is what led us to modern innovation like: the phone, the internet,and the car. For this week’s artifact of the week, we are focusing on one of these innovations. Specifically, we are featuring an invention crafted by a local man from Steeves Mountain in the early 20th century.

As many know, working on a farm is terribly hard work. From the moment the sun rises until it sets in the evening, there is never an end to daily tasks. However, it is often these laborious tasks that spurr amazing innovation.  The artifact that can be seen in the picture below is actually an early electric washing machine that has been altered and repurposed to become an electric butter churn. In understanding how difficult it was to churn large amounts of butter by hand, this local gentleman decided to do something about it. Using the spinning and churning function already built into the washing machine, he replaced the washing blades with paddles and created a wooden barrel to fit around them. This way, when plugged in, the washing machine would churn butter without ever having to break a sweat! The barrel could then be easily removed in order to transfer the butter out and properly clean the barrel between uses. We certainly had some resourceful individuals living in our area!

ARTIFACT OF THE WEEK #6 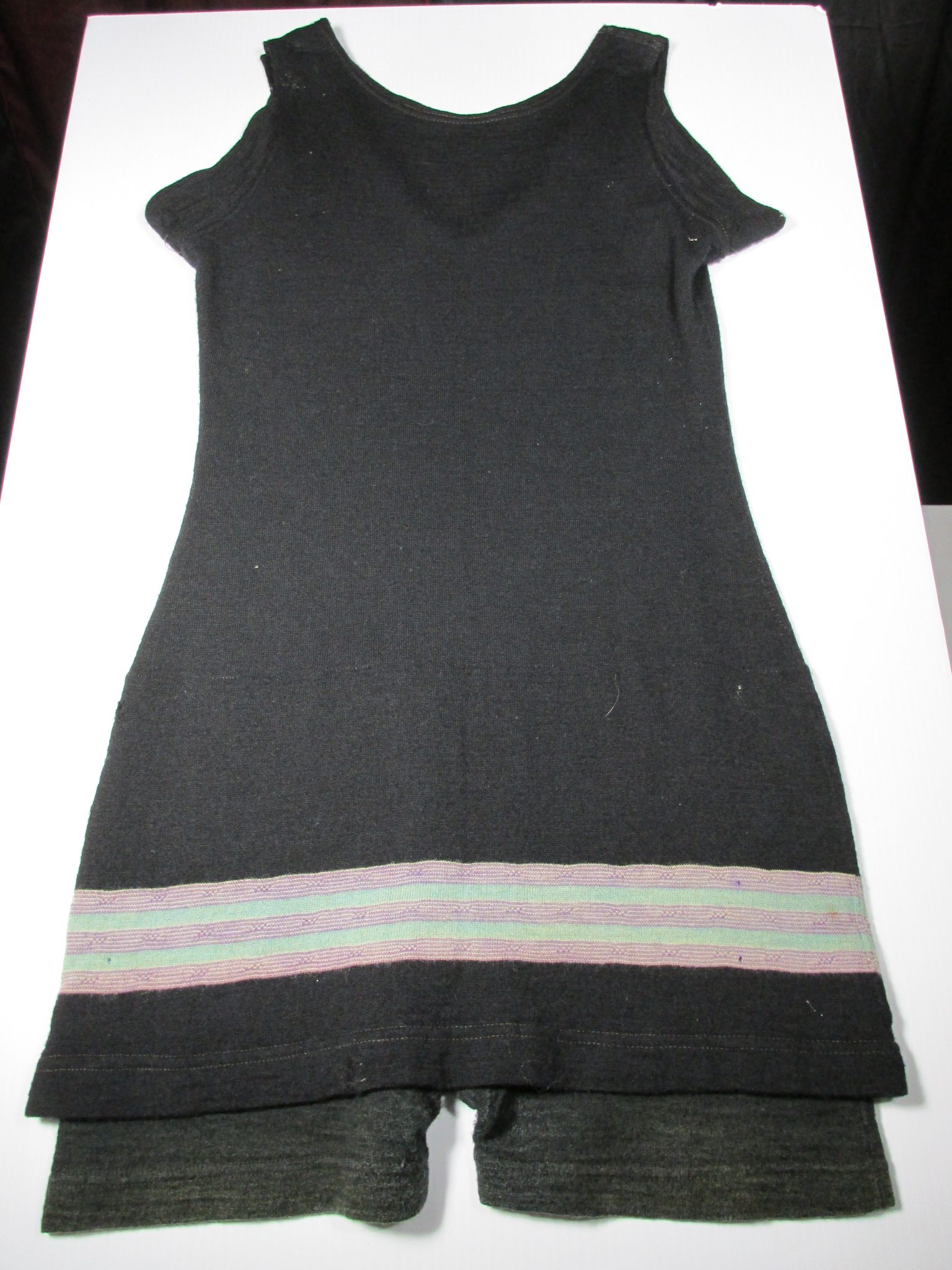 The artifact we have here is a mens woolen bathing costume, or bathing suit, that dates to about 1935. When we think of woolen garments, what generally comes to mind is socks, hats, mittens, and other articles designed to keep us warm. However, during the late 1800s and early 1900s, wool was the most commonly used material for swimsuits. While this may seem to be an incredibly uncomfortable material to use, the reported elasticity and overall availability of wool made this material a seemingly perfect fit. We must remember that nylon and polyester were not even invented until 1939, let alone widely available.

Additionally, prior to the 1940s, men did not swim bare chested. This practice finds its origins during the Victorian era. During that time, Western cultures placed great importance upon one’s modesty. As a result, individuals took great effort to ensure they were always covered. In fact, during the mid 18th century, men would wear woolen ankle length pants and long sleeve tops. Alternatively, women would wear ankle length, long sleeved, chemise type bathing gowns that often would use up to 9 yards of wool to make! Over time however, attitudes began to shift and mens swimsuits lost their sleeves and long pants. The style of bathing costume seen here would have been popular from the early 1900s and would have gone out of fashion circa the 1940s.

ARTIFACT OF THE WEEK #5 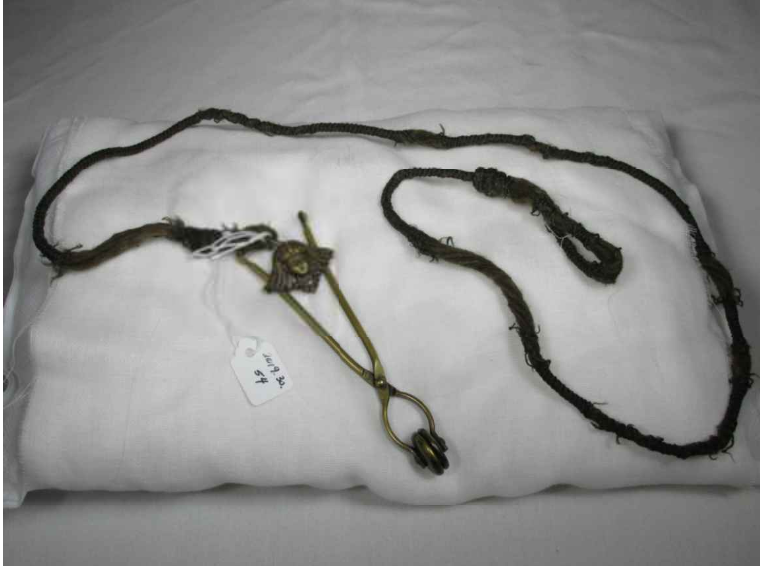 This rather unique artifact is called a skirt lifter. Skirt Lifters, also known as dress lifters or dress holders, were developed in the 1800s as a means of keeping women's skirts from getting wet and dirty while out walking or engaging in recreational activities. They became most fashionable during the mid 1870s.

The cord at the top of the device would be looped/tied around the waist and the skirt lifter would hang to one's side. To open the clamp, simply slide the centerpiece towards the bottom of the clamp; it will open up like a pair of tongs. The fabric of the skirt could then be placed between the metal disks. To secure the clamp, the centerpiece would be slid back into place and the cord around the waist would be tightened for desired lift.

ARTIFACT OF THE WEEK #4 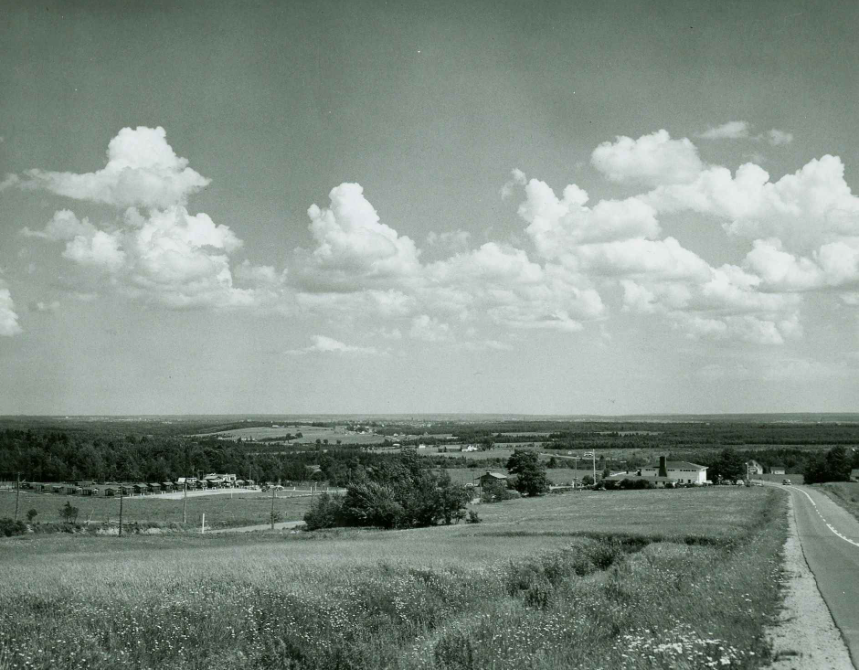 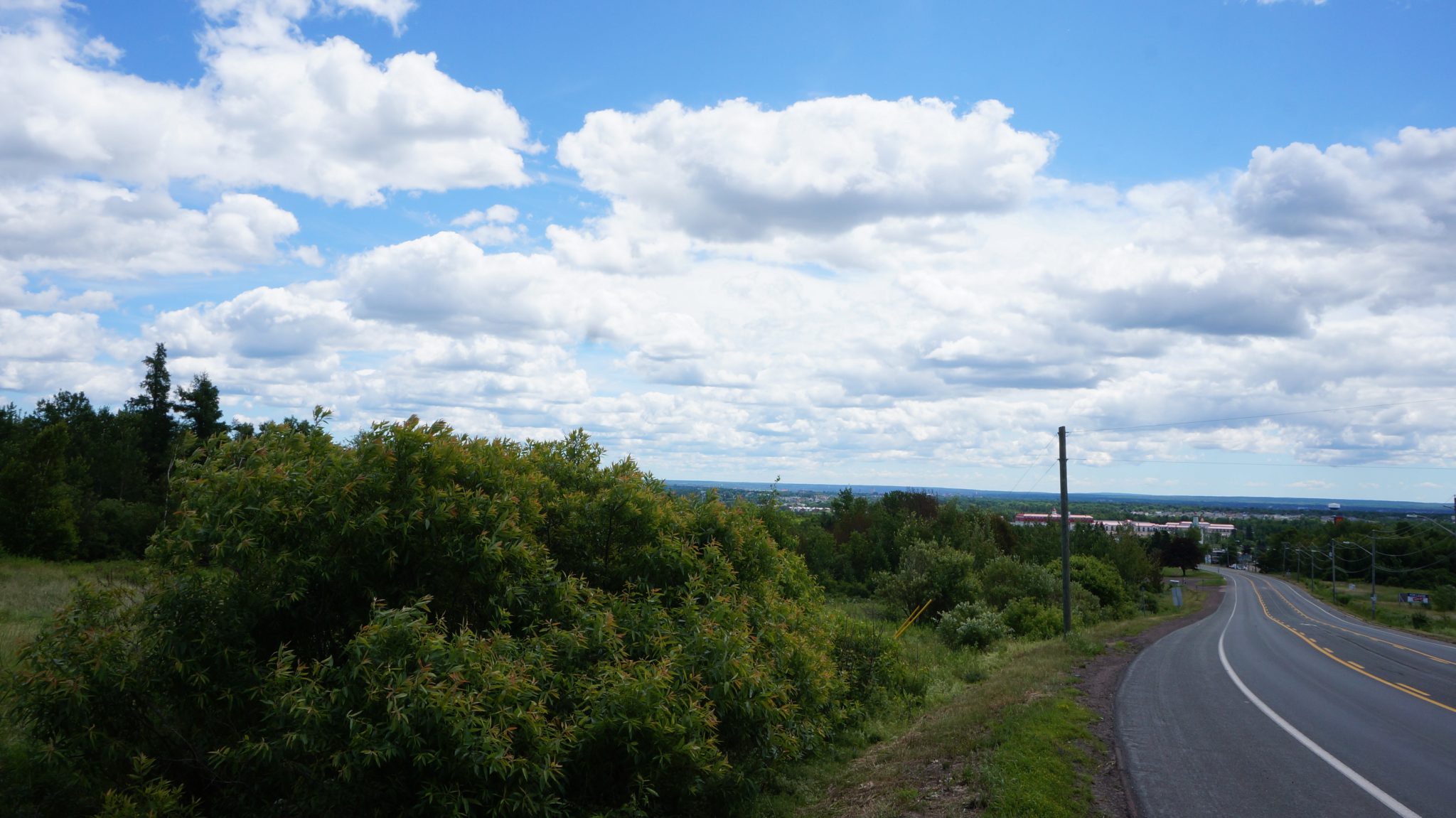 Oh, how much has changed! The second photograph here was taken in July of 2022. It is taken from the same position and same angle and shows how Moncton and the area has grown and changed in the last 70 years. While there has certainly been a lot of industrial and residential growth, this area has also seen lots of tree growth too!

ARTIFACT OF THE WEEK #3 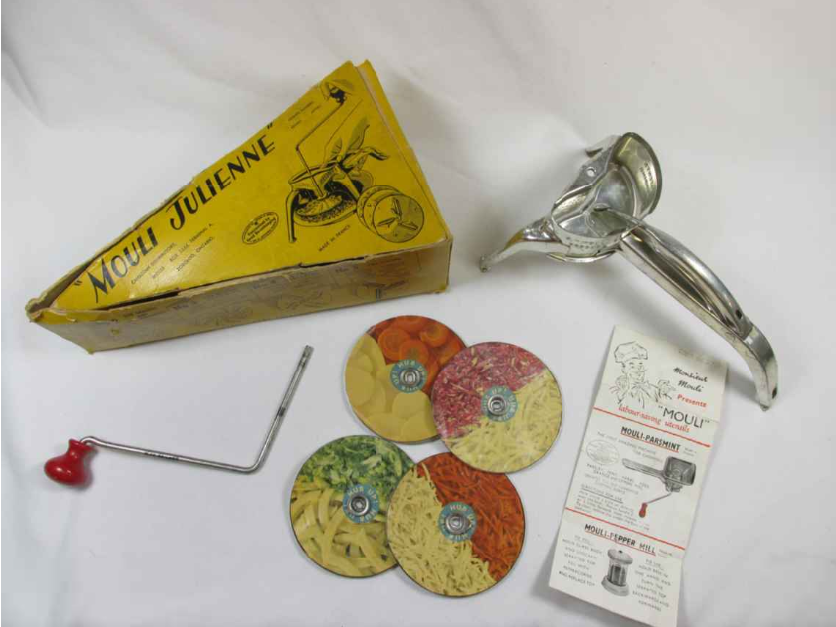 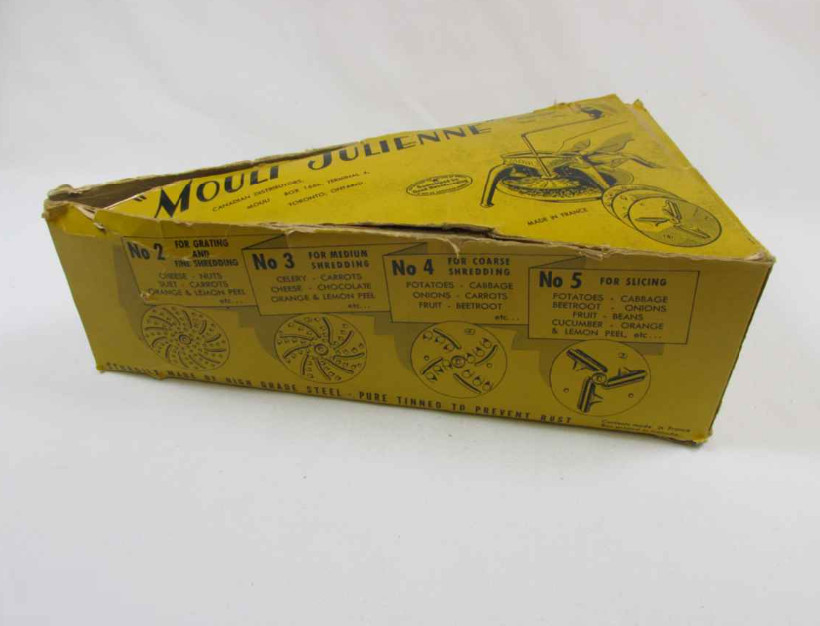 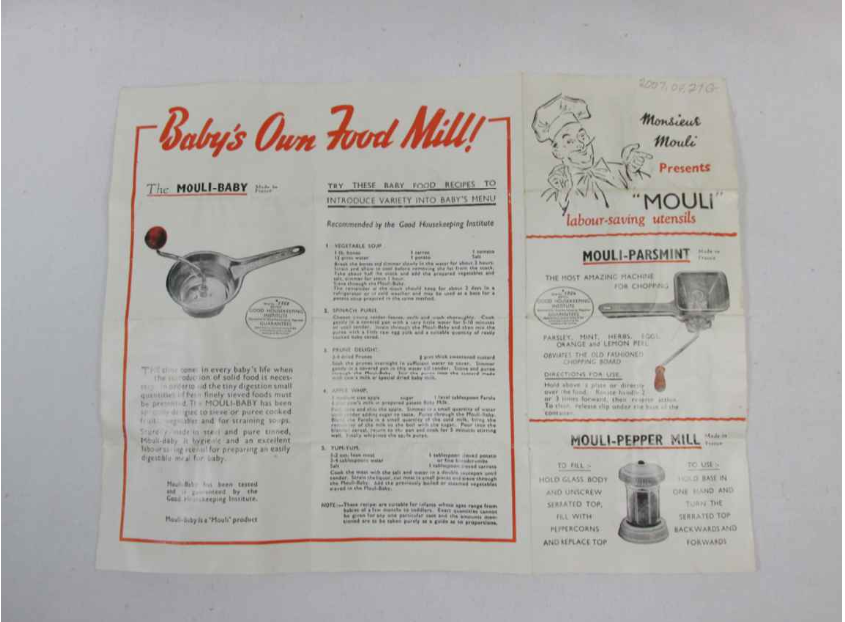 In honour of Bastille Day today, we are featuring an artifact created by a French inventor and industrialist. This artifact is called a "Mouli-Julienne" and was a precursor to our modern electric food processors. Using various different grater settings and a hand crank, this contraption would have been used in the kitchen to help home chefs to grate, chop, or slice vegetables into the perfect shape for their meal. This particular version of the "Mouli-Julienne" in the triangular yellow box would have been sold at T. Eaton Co. Ltd stores across Canada during the 1940s and 50s.

The Moulinex company (referred to as Moulin-Legumes at the time) began in 1932 when French inventor and industrialist, Jean Mantelet, developed the first hand cranked food mill for pureeing vegetables in Bagnolet, France. It was called the "Moulin-Legumes" and it became such a staple kitchen appliance that 2 million units sold within the first two years. Following the success of the "Moulin-Legumes", the company went on to create more hand-held kitchen appliances such as the "Mouli-Julienne" in the late 1940's. The popularity of Mantelet's appliances reached a peak when he was given the idea to motorize his appliances. This spurred the invention of an affordable household coffee grinder which was marketed as the Moulinex. Due to the international popularity of this appliance, Mantelet changed his company name to Moulinex. You can still find a range of kitchen appliances under the name Moulinex in stores across Canada today.

ARTIFACT OF THE WEEK #2 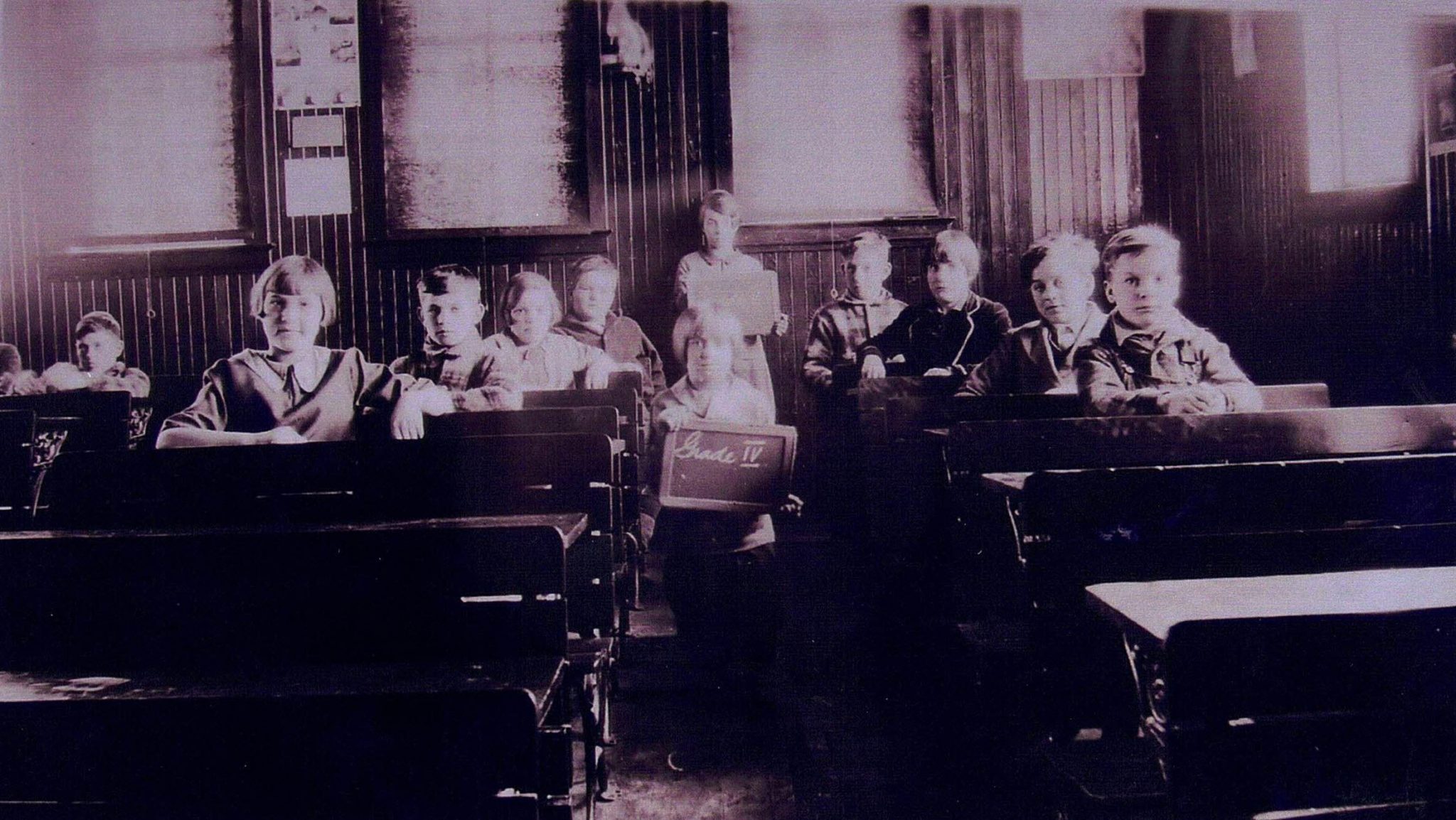 This photograph was taken circa 1925 inside of the Cherryfield School House. This one room school house was situated on the west side of McLaughlin Road in modern Moncton, NB.  The Cherryfield school was established in 1894 and served as a school in the area until 1962.  The building itself was one and a half storeys high and was set upon a concrete slab. It featured white horizontal wood siding, a double hung window on either side of the front door, and a small window was hung above the door. Although there was no evidence of a chimney on the steep gable roof, pupils recall the school being heated by a wood stove located in the back of the classroom. The building remained standing until it was torn down at the close of the millennium.

Featured in this photograph is the grade four and five class of the Cherryfield School House circa 1925.

Artifact of The Week #1

Today's artifact is a bike that most likely dates back to the 1880s and is considered one of the first bicycles in Lutz Mountain. The tires are made of wood, rather than the rubber used today. Also, there are no brakes! Yikes!
This bicycle belonged to Melbourne Steeves, born in 1879. He was the son of Samuel Steeves.
Scroll To Top