This hand written recipe for making hard soap was donated to the Lutz Mountain Heritage Museum in 1977.  It shows a recipe for hard soap made with rosin, a resin from pine. Rosin soap was most commonly used for laundry.

*Animal fats such as bacon grease, dripping from chicken etc. 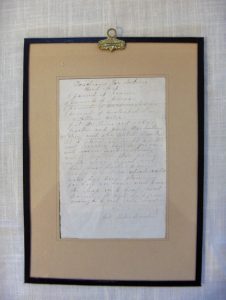 Put the lime and soda together and pour the boiling water over and stir until dissolved. Let it stand all night (?). Next morning boil the grease and rosin together (?) until melted. Then pour in the clear liquid and boil one hour. Have ready a tub in which cold water has been standing for half an hour and pour in to cool. Next morning it will be firm enough to cut into bars (?).